The girls are back and bloodier than ever.

Some of you may be familiar with my previous Rat Queens article, published after the announced hiatus of my favorite all female adventuring comic. Well, at last the cries of the fans have been answered! A new #1 was released on March 3rd, 2017 and I am pleased to announce that it did NOT feature the return of the original Rat Queens artist, accused of domestic violence back in 2014. Instead we are introduced to a new Rat Queens artist, Owen Gieni. While the style is notably different, I personally think it suites the girls rather well. However, this leads me to my first analysis of the new issue and before we go any further, I’ve got to get this out of the way:

SPOILER ALERT. IF YOU HAVE NOT YET READ RAT QUEENS VOL. 2 ISSUE 1 THEN PLEASE GO AND DO SO BEFORE CONTNUING UNLESS YOU REALLY DON’T CARE ABOUT SPOILERS, IN WHICH CASE WHAT KIND OF HUMAN ARE YOU?

Okay, now that we’ve gotten that out of the way. The first thing I noticed with the artwork was in relation to the individual character designs. Most of the girls seem to be pretty much line for line their previous selves, with the exception of Violets beard, and Hannahs horns. At first these wouldn’t seem like major changes, but when coupled with the already confusing intro of having Hannahs dad now living with the girls out of nowhere, all it does is raise even more questions. At first I thought maybe the comic was picking up a fresh start and not interested in carrying on its previous topics and story lines. I tried to re-read the issue attempting to push all previous lore from my mind and experience it with fresh eyes, pretending I was just meeting the girls for the first time. And let me tell you….It did not help. 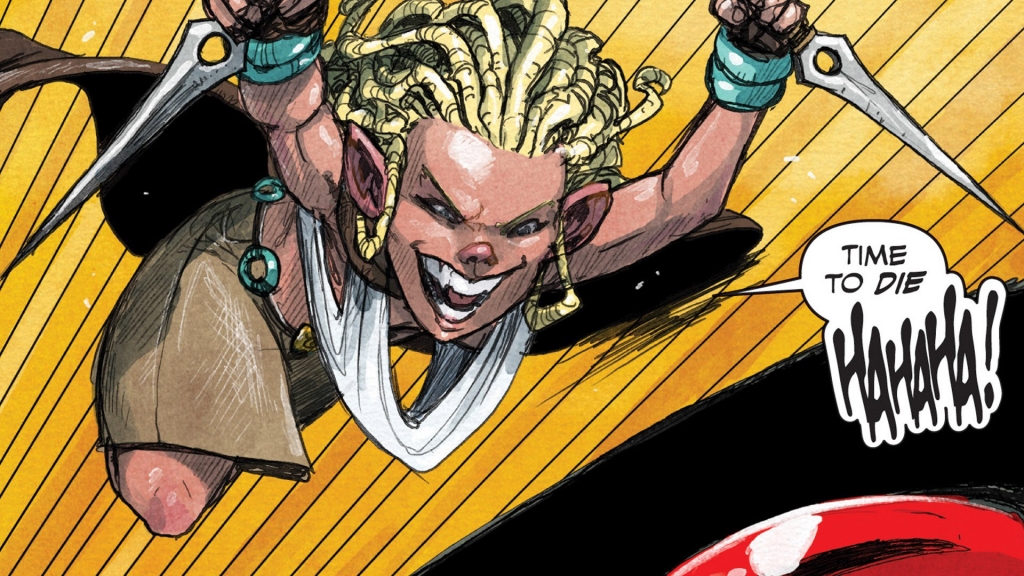 As much as I love the series, this new #1 is incredibly confusing. It’s clearly pulling from previous storylines and yet doesn’t match up with where the original comic left off in any way. For starters, Hannah and her father. Previously, Hannah was trapped in some kind of prison back at the college, with a very intimidating mostly-shaved head and a lot of angst. Her friends had all just made it back home without her, all seemingly oblivious to Hannahs strife, as if under some kind of memory modification or trance. I myself was of the belief that they never left the school and they were also in some kind of prison, just with more illusions. And will we never know what was so alarming about Orc Daves naughty bits that sent Violet into a hashing, slashing, boyfriend decapitating, rage?!?!

Now, this may be a smaller detail that I’m just far too hung-up on, but can we talk about Hannahs horns? In the previous series, Hannah is seen being shunned, mocked, and threatened as a child because of her horns. She hides them away under her fabulous hair-do and copious amounts of spite. She only twice reveals her pointy-bits, once to her lover in a clearly painful admittance to something she’s ashamed of, and second when she says “fuck all” at the college and goes full psycho bitch (which I loved). So what on earth happened to make her freely display them without a care in her normal home? And secondly, why is no one freaking out about them?? She meets a new group of people, and sure, one of them is old as dirt and the other is growing mushrooms out of his fingers, but still! No fear. Zero questions. Not even a confusing stare? What has changed?! 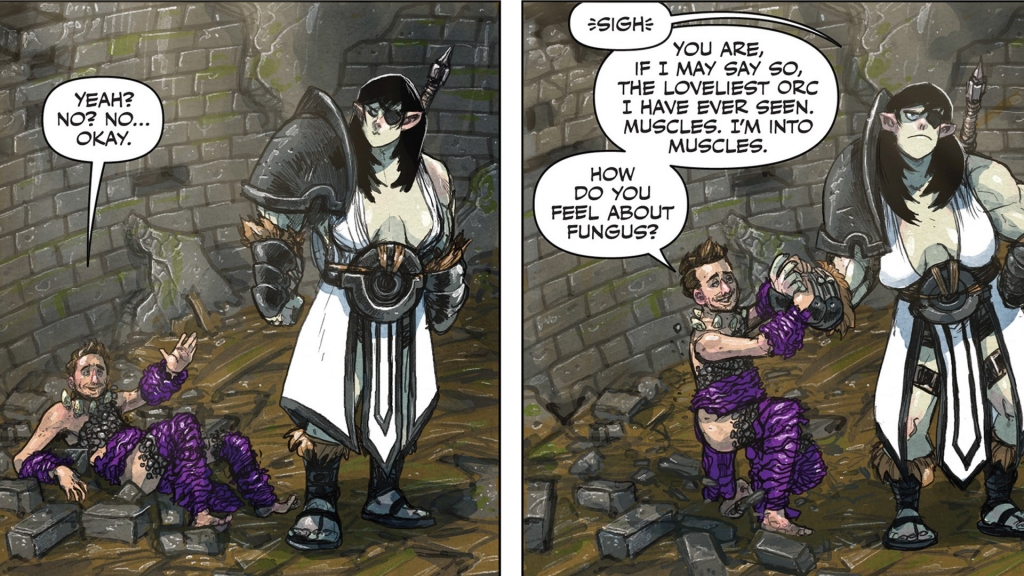 Violets beard being shaved is less of a confusing matter for me, as we start the original series with her clean shaven as well, and this is a simple thing for her to do. There are any number of reasons as to why she may have decided to trim the ol’ crumb catcher/face blanket/thigh tickler/Katie Holmes. I’m more interested in her brothers surprise appearance with his misfit group of wanna-be’s. He clearly references when he saw her last, and we are obviously supposed to recognize him. So again the question is asked….how does this new series match up with the old? Is Sawyer still alive? Has Dee looked through the eyes of her God in horror? WHAT HAPPENED TO ORC DAVE AND HIS BLUE BIRDS?? I still pleased at the addition of Burga to our rat group and look forward to what she adds to the team. I wonder though, is her backstory still relevant in this new series? I certainly hope so.

Despite all of the confusion, one thing is abundantly clear. The writing is as witty as ever, and the characters are still as close as can be, each retaining their distinct quirks. I can only hope that the pieces start to fit together as the series continues, after all, this is only the first issue. Even if the plot doesn’t quite match up yet, it’s still an enjoyable read. I for one, can’t wait for more from these badass ladies.