The PC game finally comes to the PS4.

Disclaimer: This review is for the open beta version of Marvel Heroes Omega. There may be substantial changes to a later release copy.

Marvel Heroes is a game with a lot of history. Originally released to PC gamers in 2013 as Marvel Universe Online, it later re-branded itself as Marvel Heroes 2015 following a huge update and restructuring. Though the initial release was applauded for its story and deep Marvel lore, it was also criticized for a number of control, game-play, and graphical issues, and quickly fell away from the public eye. The 2015 reboot brought a number of changes that addressed most of the original’s issues, and also reduced the severity of the ‘pay to play’ system that deeply undermined the game.

Currently in open beta, Marvel Heroes Omega almost exactly ports the computer version, while making changes to control and interface schemes to allow for easier use with a controller. The game centers around the heroes of the Marvel universe, assisted by SHIELD, attempting to take down a Cosmic Cube wielding Dr. Doom. However, this battle takes them across the globe, into space, and even into alternate dimensions, and features boss characters and support pulled from years of Marvel lore. 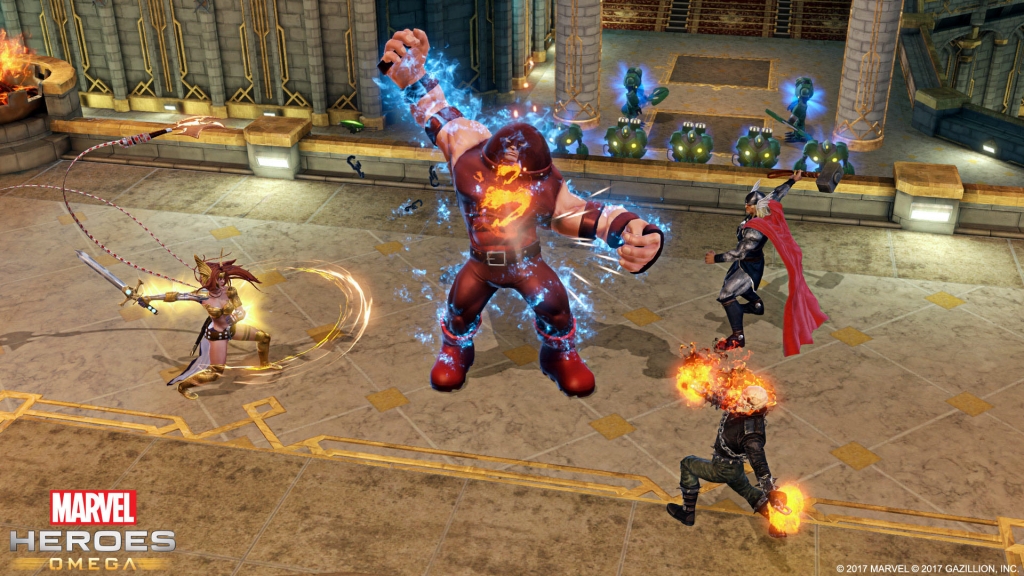 Battling these villains are 30+ heroes, all of whom can be customized and leveled up individually. Each hero features quite a few attacks and special abilities, and loadout slots for all kinds of equipment, weapons, and artifacts. While the equipment changes are never reflected on the character model itself (with the exception of some super-rare effects like smoke) each hero also features anywhere between 2-8 unique costumes. The characters range from Marvel standbys like Captain America, Wolverine, and Spider-Man, to newer favorites like Squirrel Girl and Rocket Raccoon, and even some deeper cuts like Magik and Blade. While the lineup isn’t quite as large as the PC version, players can expect an eventual migration of all of the heroes once the beta is finished.

Game-play feels very similar to games like Diablo, featuring a top down perspective, loot collecting, and hundreds of enemies to blast through. The controls on the PS4 feel natural and simple, and new players can jump right in to the actual combat within a few minutes. Navigating the menu system and equipping new items still feels like it was obviously developed for a mouse, but works well enough that it doesn’t detract from the game-play. Graphically, the game looks much better than its initial launch and flows well on the PS4, with only the occasional slowdown or frame dropping during huge multiplayer battles. Some of the character models are looking a little aged, however, and some of the older characters have a huge gap between the quality of their standard costume and the newer releases. 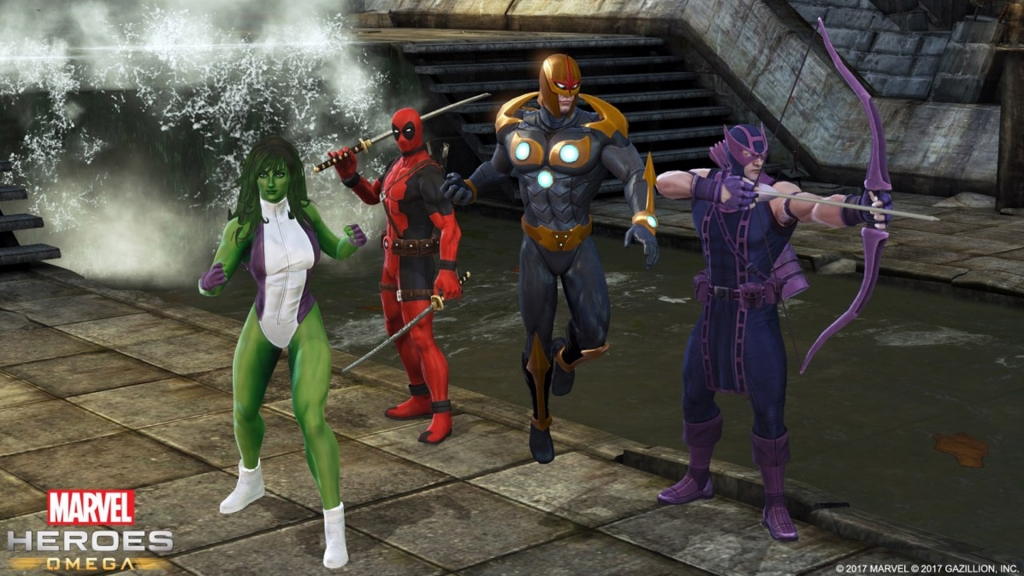 The game itself features a well-written story mode that should take the average player around 4-6 hours to complete. However, there are distractions packed into the title, such as Operations which function as single-player or group dungeons, Danger Room random simulations to battle through, a patrol mode that drops the player into a huge location with randomly generated events and spawns, and several variations of trials and challenges. For a free game, the amount of quality unlocked at the start (or within a few hours) is very high, and characters gain levels so quickly that progression doesn’t feel like a grind at all.

Omega adds in a few new features for the beta PS4 release, all of which are a welcome addition to the game. A second player can log in at any time and use any hero from player one’s roster, though they must still share inventory space. All heroes are playable after a quick tutorial, and each one can gain experience up until level 10 without purchase. Thankfully, the game starts players out with enough currency to collect at least one ‘major’ hero, or several of the less-popular ones.

The topic of currency, however, is where some of the design flaws of Omega start to show through. This is a very micro-transaction oriented game, and it shows through in a lot of ways, some of which are a big detraction to an otherwise engaging game. While the correct type of currency to collect heroes does drop randomly during the game, it does so at such a low rate that most players will likely give up after the grind to their third or fourth. Omega features five different types of currency, with even more utilized during promotions or special events. Some costumes and items can only be unlocked through a random loot crate system, but one again, low drop rates and the possibility of duplicates makes this a daunting challenge at best. Finally, there are some design decisions that are flat-out aggravating; all characters share one tiny inventory, which can only be expanded with, you guessed it, cash. Any time a player finds themselves thinking ‘this would be a lot easier if…’, chances are there is a ‘Buy With Cash’ button located nearby.

Despite a confusing currency and crafting system and some obvious ‘pay to win’ features, Marvel Heroes Omega is still a solid game worthy of any Marvel fan’s afternoon. Players who opt to only pick one or two heroes will rarely hit the invisible paywall, but collection-oriented gamers will likely find Omega too random and too expensive. Still, for the chance to play as B and C list heroes in a story that spans the entire Marvel universe, Omega can’t be beat.