A mobile brawler with a surprising amount of fun.

A spin-off/port of one of the best rated fighting games ever, Skullgirls recently hit the iOS and Android app stores. While scaled down versions of major fighting games are not uncommon, Skullgirls is unique in that it doesn’t feature the big backing that titles like Injustice 2 can tote. Instead, Skullgirls aims to keep it’s indie feel and originality, while avoiding the ‘watered down’ feel most mobile fighters have. 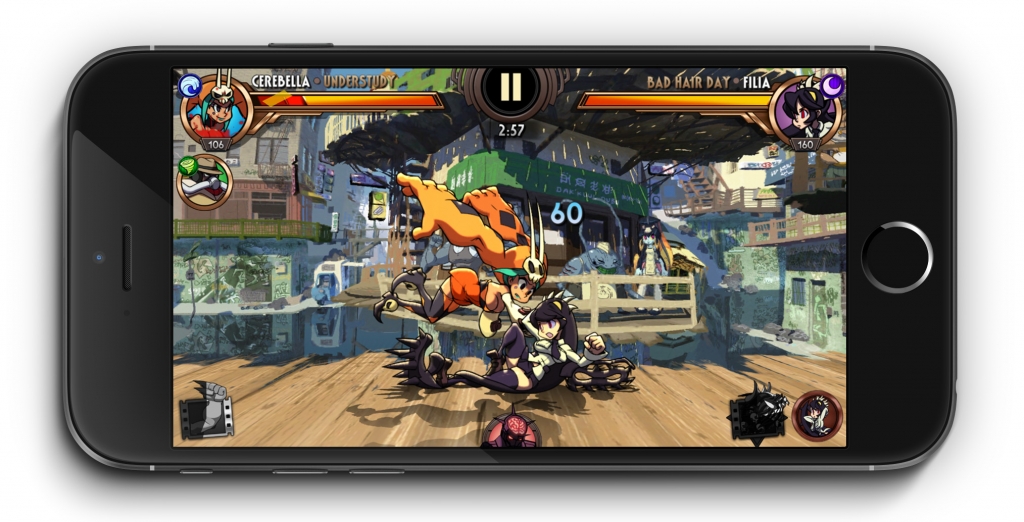 For those new to the Skullgirls universe, the storyline is rather simple: every seven years, a powerful item called a Skull Heart will grant one woman’s wish. However, if a woman with an impure soul uses the Heart, her wish is corrupted and she is turned into a monster known as the Skullgirl. Where the story stands out, however, is the fantastic diversity in it’s fighters, most of which will have first-time players wondering what exactly they are looking at. Thankfully, these detailed and memorable character designs translate perfectly to the small screen, though users with phone screens around the 4″ mark might find the action a little too hard to follow. The backgrounds, interface, and music are all similarly well done, making Skullgirl closer to a full-fledged console game than one might expect.

Visuals and music only go so far with a fighter, however, as the biggest hurdle of a touchscreen fighting game is, of course, the controls. Thankfully, Skullgirls delivers a simplistic control layout that feels quick and responsive, but not overly repetitive. There is even a decent amount of strategy in when to deploy ally assists, special powers, and when to block or retreat, especially at higher levels. While there are still some slowdown issues during big attacks, for the most part the action stays quick and clear. Special attacks are easy to pull off, and the interface is simple to navigate, despite it’s depth.

Depth in a fighting game often stops at the move list, and even more so on mobile platforms. However, Skullgirls exceeds this easily, with an entire RPG system rolled into the game. Characters level up, gain new abilities that can be swapped out, and even have personalized skill trees for more customization. While it does get a little more grind oriented as the characters reach higher levels, it never feels boring, and the progression offers enough rewards to keep players tapping. Skullgirls features a surprising amount of depth for a mobile fighter, and really gives the impression that this is a full game, not a slimmed down mobile effort.

With an overall fantastic art style, wonderful soundtrack, and well-done controls and mechanics, Skullgirls is a must for any fighting fans with some time to kill throughout the day. Even the obligatory micro transactions don’t get in the way of a fun, immersive fighter. And at the grand entry cost of $0, it’s hard to find a reason not to dive in for a few rounds.