A compact Mega blaster with a few crippling flaws.

I wanted to love the Tri-Break. The CycloneShock is one of my favorite guns of all time, and almost everything in the Mega lineup has been a quality blaster, if not logical for competitive play. Even the DoubleBreach, despite it’s flimsy build, is a lot of fun to shoot. The Tri-Break, a smaller, three shot blaster, combines some interesting ideas, but ultimately falls flat overall.

The best part of the Tri-Break is it’s aesthetics. Along with the usual red, orange, and black of the Mega line, it also features a big, triple barrel and a solid handle made for adult sized hands. It’s a chunky, powerful looking gun, and one that lends itself well to costume usage. It also has a clip area both above and below the barrel, and a single tactical rail on the top. Paired with a sufficiently bulky scope, the Tri-Break delivers an impressive silhouette. 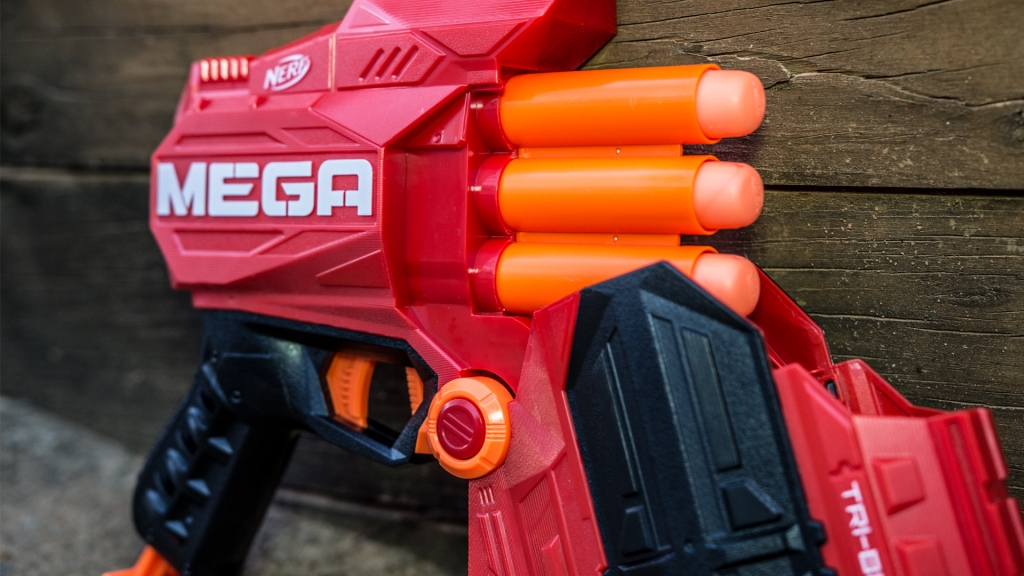 To load the Tri-Break, a second trigger releases the barrel, much like the Barrel Break. Each dart is loaded individually, and there is no storage for extra darts, so this is not a gun for quick competitive play by any means. This is undoubtably the defining feature of the Tri-Break, but unfortunatley, it’s also one of the worst. The part of the blaster that flips down is flimsy and feels like it could snap off at any moment. It’s also very, very easy to open without hitting the release trigger; simply flicking the gun with a little force is enough to pop open the barrel. In the two models we tested, both felt like they could fling the barrel clean off at any moment. Luckily, the blaster fires without it, so a modder could easily remove the entire piece. However, it isn’t a good sign for the weapon that it’s stand-out feature feels like it’s worst one. 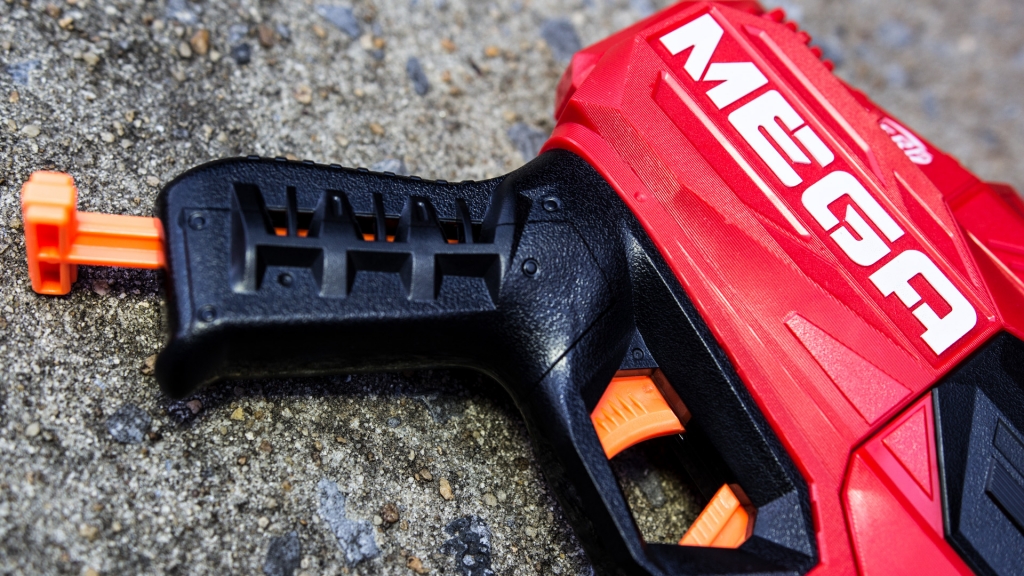 In terms of power, the Tri-Break feels like it lands around the Magnus range; it has more kick than your average N-Strike blaster, but it lacks the solid punch of a CycloneShock or Centurion. Accuracy is average, with around 60% of shots hitting a target at 50 feet. Priming the blaster, however, is done through a plunger at the bottom of the handle, and each shot requires individual priming. The darts do fire one at a time, which is nice, but with only three shots and no storage, it’s hard to see an advantage in taking the Tri-Break over any number of other blasters. Finally, the priming plunger seems like an afterthought in the overall design of the gun; it’s a little awkward to get to, and stands out as a cheap looking piece of plastic in an overall cool looking gun. I understand the limitations of the mechanisms in a smaller gun, but there had to have been a better way to set this one up.

For collectors or die-hard fans of the Mega line, the Tri-Break is an inexpensive side arm. However, awkward reloading and priming, combined with a flimsy hinge, will probably keep this out of anything more intense than a casual firefight. If you’re in the market for a Mega pistol, the CycloneShock still reigns supreme.