Why You Should Be Reading Power Rangers

Home/Comics/Why You Should Be Reading Power Rangers
Previous Next

Why You Should Be Reading Power Rangers

The campy heroes have been heading up their own surprisingly good comic.

There are certain creative properties that lend themselves to more serious stories, such as Batman, Wolverine, etc. On the other hand, there are ones that, even at their most serious, can’t help but be overly comical and bright. If you had asked the average reader where the Mighty Morphin Power Rangers fell on this spectrum a year ago, there’s no doubt it would be as far towards ‘campy’ as the scale could go. And the chances of a mainstream comic featuring the team competing for shelf space with the big publishers would have been laughable.

Fast forward to 2016, and the Rangers are on the dawn of a new resurgence. With a live-action movie in the works that promises a darker tone, the joyful, color-coordinated Rangers of the original series seem to have gone the way of childhood memories. Except, surprisingly enough, for the ongoing BOOM! published comic, Mighty Morphin Power Rangers. Here, the prismatic, spandex-clad warriors do battle with Rita Repulsa and her army of monsters just like they did in 1993. It’s the familiar line up of the original five, complete with Zords, karate, and lessons on friendship, but with enough modernization and wit to wrap the whole thing in fresh packaging. 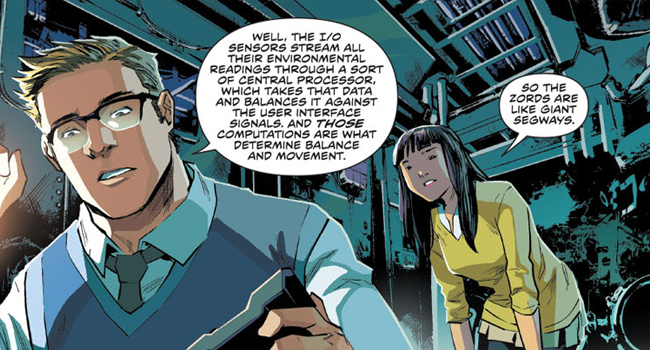 It would have been easy to reboot the series with the same dark, serious tone as the upcoming movie. On the other hand, the camp and nostalgia could have been brought out to full parade, throwing aside any pretentious of character development or story. What came out of BOOM!, however, was a mixture of the two: a comic that isn’t afraid to let giant monsters slug it out across a city skyline, but also doesn’t try to recreate the (admittedly pretty terrible) comedy and slapstick of the television series. In a way, it feels like the creators of the comic decided to treat the Rangers as an entirely new set of superheroes, not linked to their goofy past or locked into their grim future. Five issues in, and The Mighty Morphin Power Rangers have earned a spot on the shelf with the comics their childhood fans were reaching for. 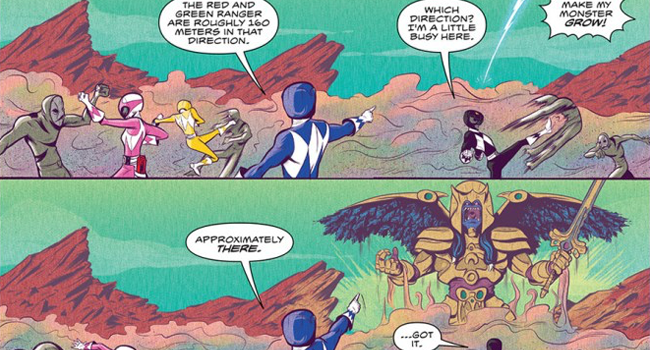 Hitting the ground running the first issue, MMPR picks up immediately after the Green Ranger, Tommy, has switched to the side of good. The apprehension of his teammates at working with a traitor is mirrored by Tommy’s own self-doubt and constant, near-crippling anxiety over Repulsa’s hold on his powers. This is all explored over a backdrop of huge monsters, robot battles, and plenty of high-flying martial arts. While the focus may be mainly on Tommy for the first few issues, each Ranger is given enough of the spotlight to bring out their characters, though it never feels like the writing is beating you over the head with the point. Even better, the dialogue is fairly natural and sounds like real people having real conversations. The awful attempts to sound ‘hip and young’ are dialed down significantly, as are the antics of the more slapstick characters like Alpha (though Bulk and Skull get their own chaser comic in every issue that is solidly ridiculous, it doesn’t effect the main story at all). The writing treats the subject matter as serious and dangerous, even though it echoes the original series. 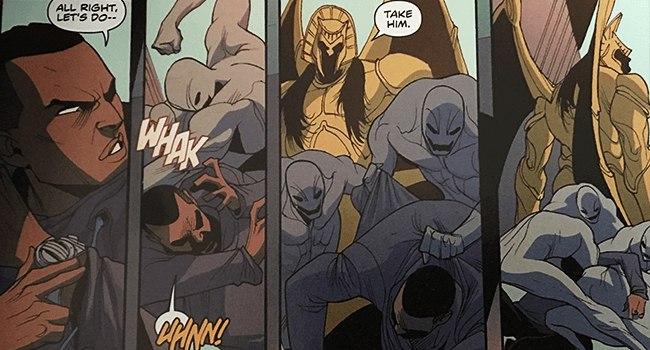 Chances are, many readers have skipped over the Rangers, thinking that the original formula would in no way translate to the comic page. In a way, they were right, but what BOOM! has done instead is create a viable new property, featuring just enough nostalgia and charm to pick up the fans who used to cling to their televisions every Saturday morning, but enough depth to satisfy the adults they grew up to be.