A cheap alternative to mainstream blasters with an insane capacity.

While the battlefield of dart blasters may be unquestionably ruled by Nerf products, there are still countless other ‘bargain’ weapons lining the shelves. Most of these blasters are shoddy, underpowered toys, relying on their low price point to snare buyers. However, the recent Dart Zone line looks to exceed expectations, while maintaining the entry level price. What resulted is a series of blasters that are surprisingly powerful, fairly dependable, and overall much cheaper than competing brands. 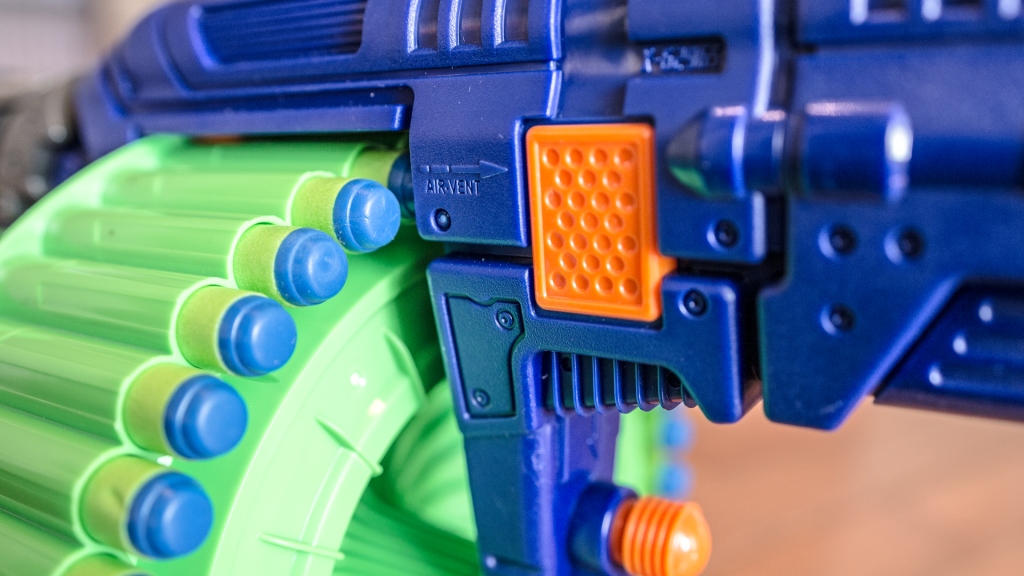 The Dart Zone Magnum, coming in at a modest $20 MSRP, touts its main selling point right out of the gate: a massive 40-shot rotating drum. While power blasters with extended clips and flip-magazines might approach this capacity, the ability to shoot a pistol-style blaster 40 times without reload is a supreme tactical advantage on the battlefield. Aesthetically, the gun doesn’t have much else to offer besides this obvious focal point, sporting a fairly conservative and streamlined design. If it wasn’t for the drum, nothing about this blaster would stand out as unique, but with it it’s an unmistakable silhouette.

Capacity, however, is nothing without performance, and the Magnum delivers a surprising amount of quality. After running through the entire capacity three times, we only encountered one misfire, and one skipped round. Both of these were quickly remedied by pumping the priming slide and simply moving onto the next shot. This was especially beneficial as the Magnum has no jam door, so darts that become lodged inside the barrel would need to be fished out. The power of the blaster is exactly where the box claims, sometimes hitting ranges of above the 80 foot claims. There is a distinct, very loud metal sound with each fired shot, and in fact, the somewhat cheap-feeling construction has us concerned that the powerful firing mechanism will eventually shake lose the hollow shell. Chances are, this is an unfounded fear, but the fact that the gun has a powerful feel remains. It comes with a flip out arm rest, meant to steady the gun when aiming, though this seems to mostly just get in the way by rotating every time the gun is moved. Luckily, this brace can easily be removed with a screwdriver and a few minutes. 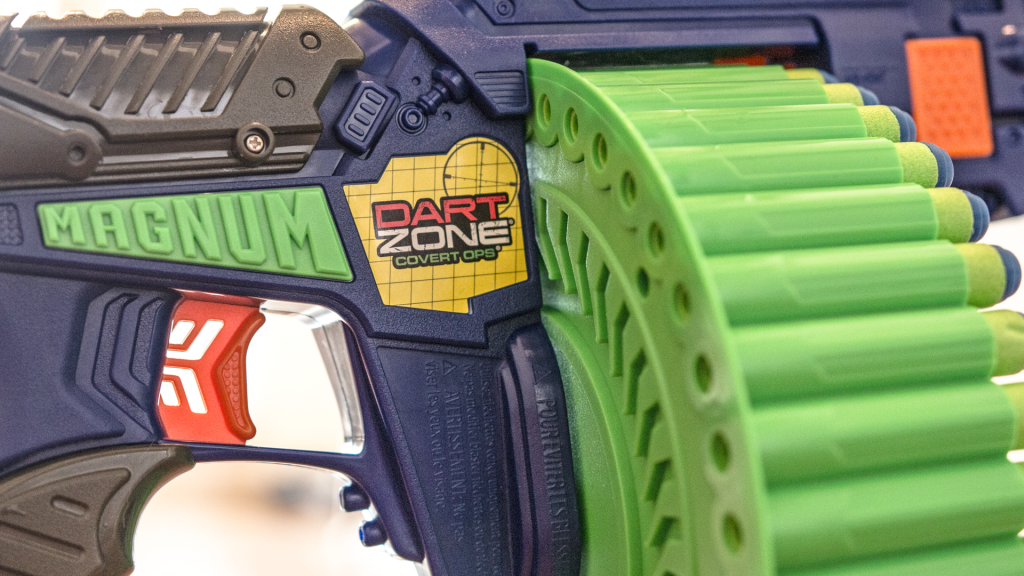 Accuracy, however, is not the strong suite of the Magnum, with less than 60% of tested shots hitting a human sized target at 25 feet. This number drops drastically when using the slam-fire mode, however, this is to be expected. Due to this variable accuracy and distinctly loud noise, this is not a blaster for accurate or stealthy strikes. The Magnum would be better suited to lay down a hail of cover fire, and still retain enough shots for anyone brave enough to rush the position. However, with that many shots, it could fit into a variety of scenarios, or just make a solid backup blaster. The fact that Dart Zone darts are compatible with Nerf guns, and visa versa, also allows these brands to compete in a team or on their own.

While it may slip under the radar due to price point and ‘off brand’ status, the Dart Zone Magnum is a solid blaster with lots of potential. Casual fans will love the capacity and cool-factor of such a unique gun, and enthusiasts will appreciate the power and dependability. If Dart Zone is able to maintain this level of quality with the rest of their modern guns, it’s possible they might become the true alternative to Nerf.