A stylish, but ineffective new blaster.

The flagship gun of the new Alien Menace series, the Nerf Incisor debuts along the Ravager as a Toys R’ Us exclusive. Like the Ravager, it features a highly-stylized molding that departs drastically from previous Nerf blasters. In fact, the warped dimensions and bold colors are more reminiscent of the early Nerf designs, before the more ‘realistic’ N-Strike shifted the mock-weapons to a more militaristic style. Whether or not you like this return to form, it’s impossible not to admit that the Incisor is eye-catching, and the clear purple drum and tubing conveys a very alien feel. Everything about the design, barring the safety colors, feels like a mixture of Halo and Mass Effect inspired molding. 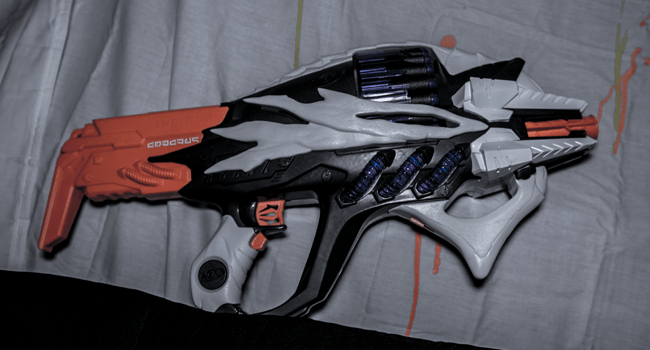 Featuring an internal drum that holds twenty darts, the Incisor requires 4 AA batteries in order to fire in a semi-automatic mode. The batteries are held in a removable tray, a departure from many of the larger guns, and only require one Phillip’s head screwdriver to access. With the tray situated near the back of the gun and fully loaded, the blaster sits at a comfortable weight and feels very sturdy. Like most Nerf battery-powered blasters, it uses a flywheel system to pull the darts from the drum. Interestingly enough, the jam-clearing door is hidden under the front, bone-like protrusion, which folds down. At first, it seemed like this was as secondary handle, but unfortunately an un-modded Incisor can’t fire with it dropped. Depending on your style of play, the lack of a clip system could be a detraction, as it must be reloaded from the front of the barrel. The Incisor does not feature a tactical rail at all, though it does have several molded hoops for a shoulder strap. 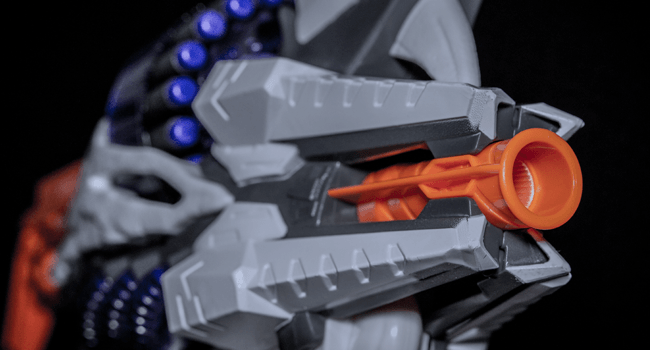 Unfortunately, the positives of the aesthetics are lost to somewhat-poor performance. Interestingly, the box art features no claims on distance, which shows that perhaps Nerf has already marked this blaster as one for less fanatic fans. Still, it pulls a modest 30-40 feet per shot when angled flat, which is a little under the standard Elite performance. Further, our demo model had some sever jamming issues; roughly one out of five times the trigger was pulled, it would fail to return to the original position. This would cause the drum rotation to stop, and the trigger would need to be jostled or tapped a few times to release it. Interestingly enough, the shots that did fire had a very consistent distance and accuracy, much better than other flywheel blasters of a similar size. If it weren’t for the faulty trigger mechanism, this blaster would be far easier to recommend on that value, and it’s aggressive looks, alone. 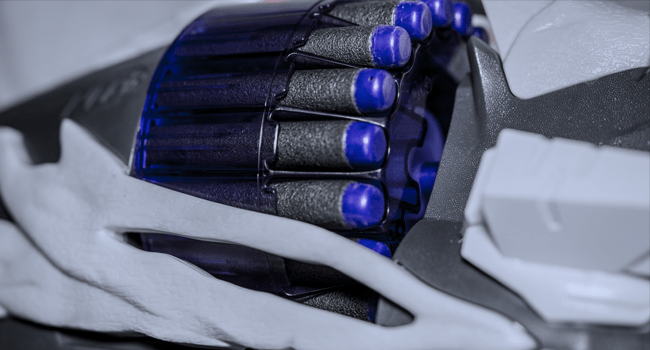 One other minor complaint on the Incisor: it’s clear this was built for a younger audience than the larger Mega Dart and Elite lines. Both the fore grip and the handle are a little too small for comfort, and the shoulder stock hovers around being too short for actual bracing, but too long for pistol-like wielding. The bottom part of the stock has a tendency to dig into the forearm of the wielder, something that again, might just be due to the gun’s overall small size.

While it may not have the performance required for Nerf combat enthusiasts who want a dependable and intense main gun, the Incisor is better for smaller hands and living room warfare. However, the shoddy trigger issue, combined with the need for batteries and a 39.99 MSRP, put the Incisor solidly in the ‘wait for a discount’ pile.