Coast 2 Coast: Back from Hiatus

Coast 2 Coast: Back from Hiatus

Alright ladies and gentlemen Josh and I are back after taking some time away with more of our thoughts on the landscape of professional wrasslin’ so let’s get to it!

1) We are just about two weeks removed from Monday Night Raw’s No Mercy Pay per view. What were your thoughts on it?

Corey: I was expecting way more out of it. John Cena vs Roman Reigns surprised me because I thought the feud would have lasted longer. I would have booked Cena to go over and while he took time away let the loss to Cena eat at him so that when he returned he would get his win, then let them have a rubber match and Roman go over. Brock Lesnar vs Braun Strowman was a dud to me. I was expecting a car wreck in the best way possible, but all we got was a slammed door. Also of all people to kick out of the F-5 it should have been Strowman. I’m ok with him losing but the match didn’t do anything for either men. I will say a highlight of the night was Dean Ambrose & Seth Rollins vs The Bar. Not only was the match great but Cesaro lost two of his front teeth and still finished the match strong like the superman that he is. Respect.

Josh: Middling. There were some really great moments. Corey already mentioned the superb tag title match and I also thought the women’s five-way was really well done. But the two big-time main events missed the mark. Partly because we were so incredibly hyped for them and partly because both matches felt really similar. Lots of big moves from opponent, kick-out kick-out kick-out, signature move from the other guy, 1-2-3.

2) Smackdown Live’s pay per view Hell in a Cell is this coming Sunday. Which matches are you most looking forward to?

Corey: Shane McMahon vs Kevin Owens is going to be great. I’m going to get money on it but New Day vs The Usos in the cell is going to steal the show. These two teams pretty much have had matches of the night for the past few pay per views and are only getting better and it’s great that they are having this match because this will be the end of a months long feud and even though their matches have all delivered I think it’s time for both teams to move on.

Josh: Usos vs New Day is the true highlight of Sunday’s PPV. We all questioned why they kept hot potato-ing the tag titles and it’s led us to this moment. This is long term booking at its absolute best. They’ve taken an excellent feud, stretched it for months, both teams picked up signature wins and finally it will all culminate in Hell in a Cell. This absolutely deserves to close the show!

3) NXT has decided to bring back a WCW classic by reviving War Games. How do you feel about that?

Corey: I AM ABSOLUTELY ECSTATIC. War Games was one of my absolute favorite pay per views in the WCW days and now to see it brought back in NXT along with all the great talent they have it’s sure the be amazing!

Josh: I’m pretty much this guy.

4) Mae Young Classic runner up Shayna Baszler has recently reported to the WWE Performance center to begin training. Do you see a future for her in the WWE?

Corey: To be honest at first I didn’t. Almost all of her matches in the MYC she was almost carried throughout by her opponent but when it came down to her vs Kairi Sane I saw a different Baszler. She wrestled as a heel and there were just all kinds of improvements I felt she made compared to her previous matches to the point that I think with a year or two of training and a decent gimmick she could make a big splash in the women’s division on NXT and the main roster.

Josh: Absolutely, Baszler has an air of authenticity about her that you don’t get with every competitor that steps into the ring. Not every former MMA star could get a WWE superstar, but Baszler gets pro wrestling and by leaning on her MMA background she’ll bring an added dimension to the women’s division. Sonya Deville might want to find a new gimmick though.

5) What were your thoughts on Cody Rhodes and the Bullet Club pulling a DX style invasion on Raw?

Corey: I absolutely loved it but I think Vince and WWE missed a major opportunity to get the world buzzing again. I can understand why Vince wouldn’t have entertained it, but when you know your son in law literally did the same exact thing less than 20 years ago I’d expect a least some type of acknowledgement of it. Eric Bishoff commented on it as well and looking back now says he wishes he would have let DX into the building back then.

Josh: I genuinely enjoy all the needling the Bullet Club is doing to WWE. It gets the Bullet Club additional exposure, and by extension NJPW and ROH. I’d also like to quickly acknowledge the amazing series of tweets that occur between Cody Rhodes and Daniel Bryan on a somewhat regular basis. 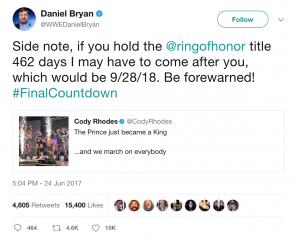 Corey:
– As much as we look fondly on what Lita did in the past I hope she never decides to do commentary again. It was brutal.
– There are more and more bullet club members coming to WWE. Hopefully at some point we can get a Shield vs Bullet Club feud.
– Kevin Owens has been on an amazing run and I’m all for it.

Josh:
– I don’t have much to add so here’s a random wrestling match from the way back when:

I come from a military family just like my Coast 2 Coast partner. I'm from Wiesbaden, Germany, but I have spent a large amount of my life in the US as well. Fan of wrestling since I was 5 years old as well as anything else that's nerd related.